All Collections
Gearset Pipelines
Promoting a change through your pipeline

Promoting a change through your pipeline

What happens behind the scenes with Pipelines

Written by Antonio Sale
Updated over a week ago

But what happens behind the scenes with Pipelines, from when a PR is opened against an environment branch to when we automatically open a PR to the next one?

These are the steps in chronological order:

Opening a Pull Request to enter the Pipeline

Step 1 - User opens a PR from feature branch to environment branch. This PR will not trigger the child validation if the CI job linked to that environment has the option "Validate pull requests" selected.

Step 2 - The PR from the feature branch is closed. Gearset opens a new PR from promotion branch to environment branch

Step 3 - This time the feature "Validate Pull Request" is triggered. Gearset runs a validation from promotion branch to the org target of the CI job. When the job is set up as Delta CI, child validations triggered by PRs are now faster because the comparison re-uses the snapshot taken after the last successful deployment run, rather than downloading again the current state of the org.

Step 5a - NO CONFLICTS DETECTED - 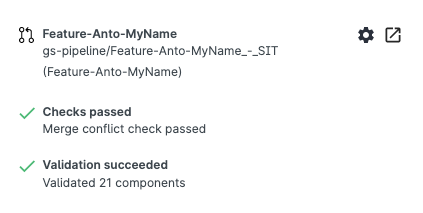 No extra action required. The merge button will be available to click. If a peer review is required, the review status will be shown in Pipelines UI for pull requests in GitHub, GitLab, BitBucket and Azure DevOps. Until the review is done on your Git provider, the merge button will be clickable but merging would just fail because conditions haven’t been met. Most source control providers give you control over the "mergeability of pull requests".

After the user choose which file they want to keep, we do a merge commit from the environment branch to the promotion branch. The PR already open will now include the new commit and the merge button will become available because conflicts were resolved. We "Validate pull requests" again, running the validation from the promotion branch against the target org, before the merge button becomes available. As mentioned above, Delta CI jobs will re-use the snapshot taken after the last successful deployment run for this child validation. This will also happen if the user makes any other commit to the promotion branch.

If the new commit resets the review requirements, the user will have to go back to the Git provider (GitHub, GitLab etc) and have someone complete it again, or the merge will fail.

Step 6 - Gearset merges the selected PR into a local branch

Step 8 - Gearset runs a Validation from the local branch against the Org target of the CI job. This should be validating exactly what ends up deploying from the environment branch when the CI job is triggered after the merge

Step 9 - API-merge of the PR into the environment branch (not Git-merge anymore):

When the user clicks on the merge button, that merge will be recorded on the Git provider as being done by the user who clicked. We use the API-merge to respect the branch protection rules

Step 10 - CI triggered by the change in the branch

Step 11 - The package is deployed to the Org. On Salesforce the deployment will appear as done by the pipeline owner. After a merge to the environment branch, a webhook is triggered which kicks off propagation on the Pipeline. Propagation is independent of the CI job doing the deployment. 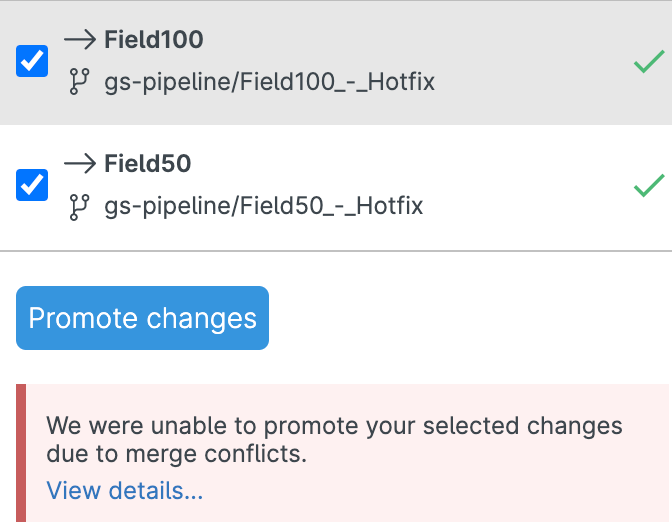 At this point the user can try promoting the changes one at the time, or they can resolve the conflicts manually and try again. Gearset will also offer to proceed with the successfully merged changes:

Step 8 - Gearset runs a Validation from local branch against the Org target of the CI job. This should be validating all the PRs together.

Step 10 - We do our best not to trigger the CI job one time for each PR merged. To be more specific, the CI job is paused while we do the merges and then turned back on at the end to do one deployment only.

Step 11 - The package deployed to the Org. On Salesforce the deployment will appear as done by the Pipeline owner.