Reports and report folders are metadata types supported by the Salesforce API.

By default, reports are stored in the Private Reports folder, which is not accessible via Gearset so any reports saved there will not show in a Gearset comparison.

Here you see that New Contacts & Accounts Report private is saved in the default Private Reports folder and is not accessible via Gearset.

In order to make reports deployable, they will either need to be put into the default Public Reports folder or a folder you create. 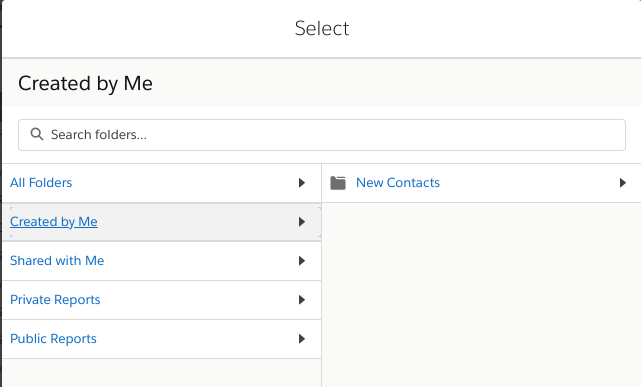 If you save the report in the Public Reports folder, the report will show as unfiled$public/(ReportName)

If you save the report in a custom folder, the report will show as FolderName/ReportName.

When performing a comparison where you want to include both reports and report folders, select the Report metadata object and “All Items”.

This will show both:

This shows only the Report Folders.

The comparison shows those reports and all report folders, not just the one associated with the selected report.

Selecting a report to deploy.

If the report’s folder does not already exist on the target, it will be included as a suggested solution.

If the suggestion is not added the validation will fail.

If the report is in the Public Reports Folder a folder will not need to be added.

If you have any another questions feel free to get in touch via the in-app chat.