Getting started with the Gearset Reporting API

Written by Julian Wreford
Updated over a week ago

The Gearset Reporting API allows you to get information to measure your DevOps performance. It presents a wide range of information to enable the calculation of DORA metrics for pipelines. In this walkthrough, we'll be using the Reporting API's dynamic documentation to query it.

DORA (DevOps Research and Assessment) is a group of metrics originally pioneered by the team at Google, and has become the universal standard by which we measure DevOps performance:

The first two metrics measure the speed of our release pipeline, while the other two focus on its stability. They're a crucial way for team leads and managers to understand their DevOps process.

Our aim with the Gearset Reporting API is to provide a summary of the DORA metrics, but also to go further and allow you to explore your own data to dig into the resilience and velocity of your DevOps process. With this in mind, for each metric, we expose two API endpoints — one providing the raw data that can be used to calculate the metric, and another that presents aggregate information required to directly plot the DORA metric on a line graph.

Firstly, we need to get the ID of the pipeline. To do this we go to the pipelines page and get the required IDs from the URL bar. For Lead Time we need the pipeline ID, but for some other metrics we need the environment ID. 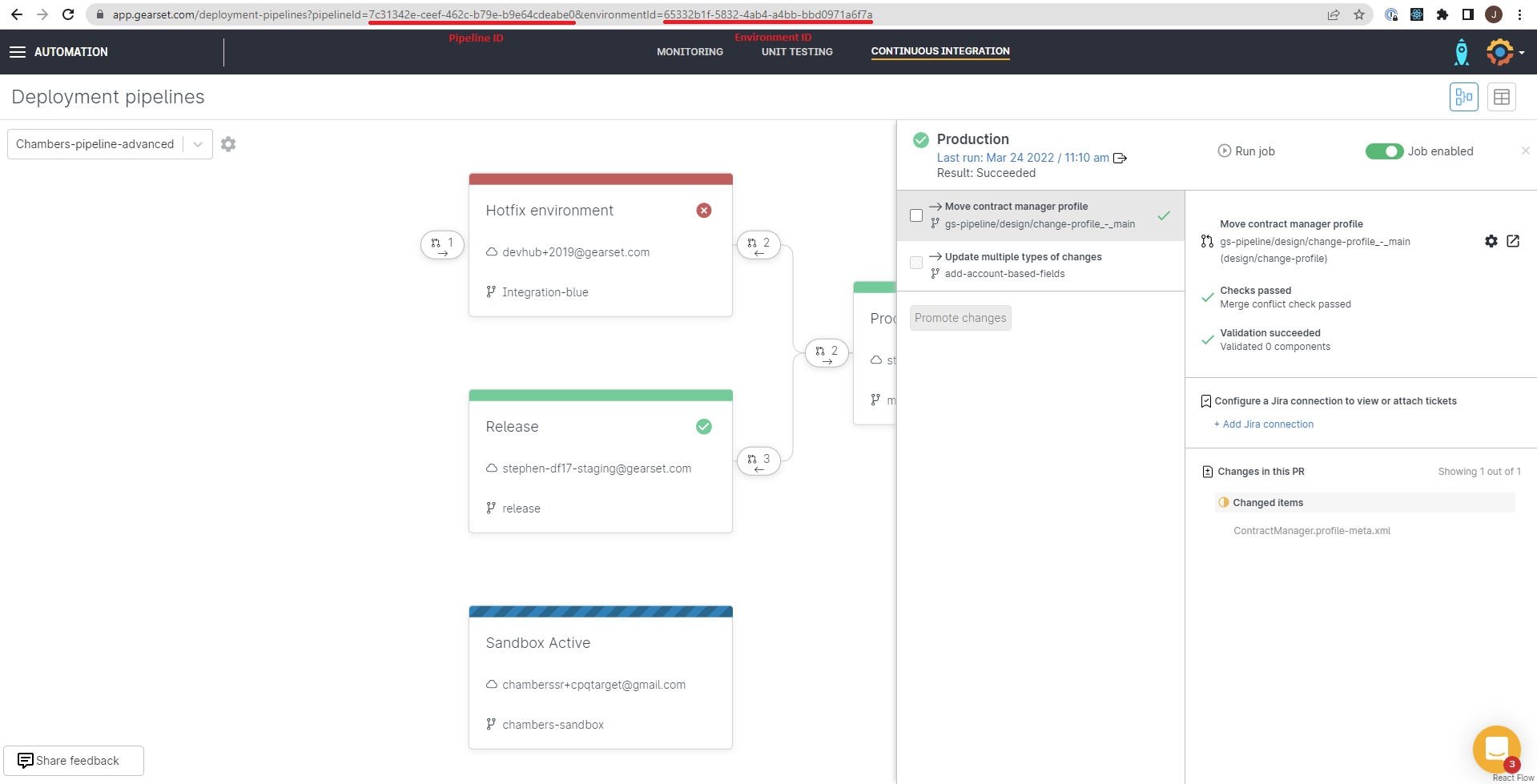 Once you have copied the pipeline ID, we can create a request using the Reporting API dynamic documentation. First, we log in with our access token.

Enter the authorization token that we got earlier, prefixed with the word "token". 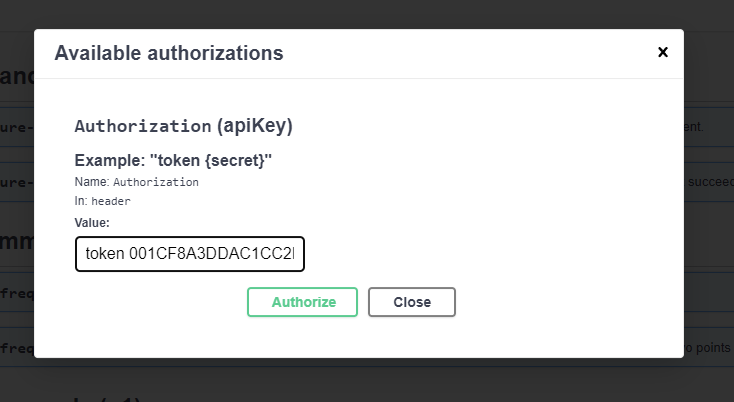 Now we can go to the Lead time for changes section, and click on the "Try it out" button.

We then fill in the ID and the time frame to query, and click "Execute".

This will send off a request to the Reporting API. Once executed, it presents the curl command that was used (so you can use it elsewhere) and the response. This can be copied or downloaded. 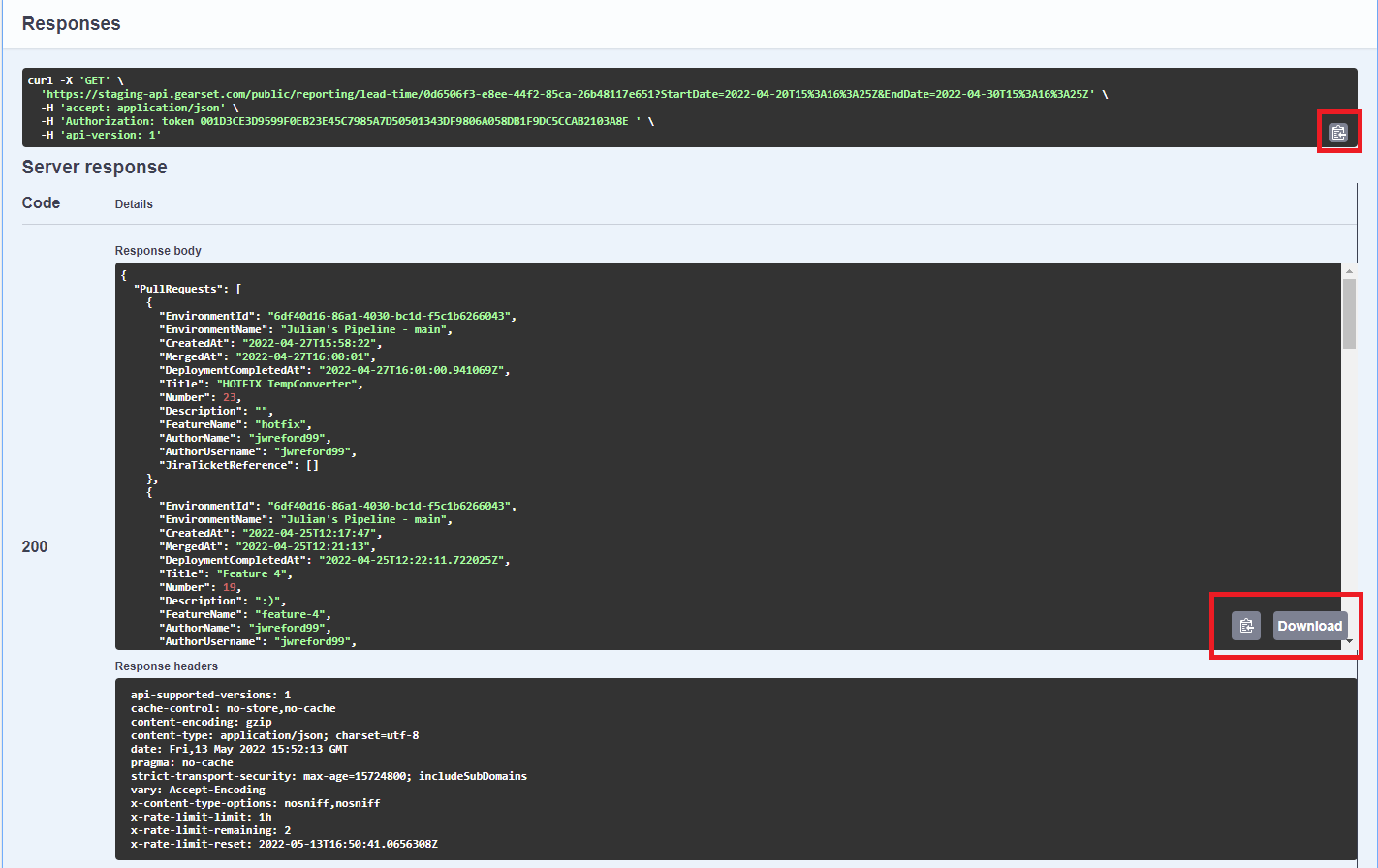 A similar process is used to query the aggregate endpoint for lead time. This time, instead of returning a list of pull requests, it returns a dictionary of "end" environments in the pipeline that each contain groups of data for the mean, maximum, and minimum lead time. They can be directly plotted onto a graph using other tools. 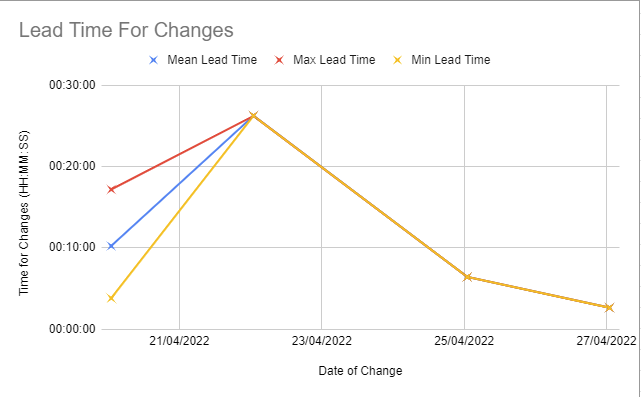 The process we used to query the API for Lead time for changes is the same process as that used to get the other three DORA metrics.

How does the Gearset Reporting API identify failures?

It is first important to note that we present two different types of failed deployments, depending on which endpoints are being used.

By contrast, a failure for the reliability endpoints is a failure where the deployment was completed successfully (i.e. changes were made to the org as expected), but the changes caused an issue in the Salesforce org, such that a fix was needed to get it to have the correct behaviour. So, when we talk about change failure rate and time to restore, we are not talking about whether the deployment failed, but instead whether the changes in the deployment were correct or whether they failed in some way.

The Gearset Reporting API uses some heuristics to detect if it thinks some changes were a failure. These heuristics are as follows:

Using these heuristics, the Reporting API is able to identify failures for the purpose of measuring a team's change failure rate and time to restore.

If you have thoughts or feedback on this document or the Reporting API functionality, please get in touch with us via Intercom. We would love to hear your suggestions. To look at some Reporting API commands, you can access the API reference here.