Written by David Emmerson
Updated over a week ago

When deploying or validating a package to Salesforce using Gearset, you're able to specify which Apex test classes you want Salesforce to execute as part of validating the package. 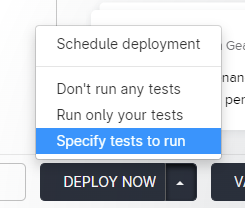 When you choose this option, Gearset will list all of the available test classes that are contained in the target org or in the package itself.

Here, because my package included the Apex class named MyClass, Gearset suggests that I probably want to run MyClass_T. It has based this on the _T suffix, which is one of a few patterns used to suggest tests based on naming convention.

The feature to automatically detect relevant tests is actively being developed, with the name-based suggestions being the most recent update. If you encounter any situations where we aren't suggesting a test that you would have expected, please let us know via the in-app chat and we'll make improvements where possible.

It's also possible to use the suggested tests feature when setting up a CI job.

With a manual compare and deploy, you're in a position to amend the suggestions, adding extra tests and removing those you're not interested in running.

When it comes to CI runs, there's no manual selection of tests, so it's important to know how the suggested tests are chosen. This will enable you to maximize the chances of running all the relevant tests and achieving acceptable code coverage.

When is a test class suggested?

A test class will be suggested if one or more of the following criteria are met:

Let's look at these criteria one by one.

Test class included in the package

If you're changing an existing test or deploying a new one as part of your package, then Gearset will include these in the suggestions.

In practical terms, making sure that the test class matches the naming convention is one of the easiest ways to ensure that a test class will be suggested.

If MyClass is included in the package, the naming convention will include any tests with the following names:

These matches are done case-insensitively, e.g. we'll include MyClassTEST.

So, for example, if you're testing a trigger, then having MyTrigger tested by MyTriggerTests will ensure that the test will be suggested.

References a class in the package

When Gearset needs to provide test suggestions, it makes a call to the Salesforce API and requests a list of all Apex classes and their associated symbol tables. These tables are used to determine if there are any test classes in the org that have a reference to one of the Apex classes being deployed.

Gearset development is guided by our customers, so please let us know if you have any suggestions about how we could improve this feature.